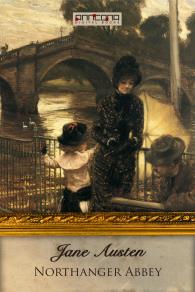 by Jane Austen
Northanger Abbey  was the first of Jane Austen's novels to be completed for publication, though she had previously made a start on Sense and Sensibility and Pride and Prejudice
Austen died in July 1817. Northanger Abbey (as the novel was now called) was brought out posthumously in late December 1817 (1818 given on the title page), as the first two volumes of a four-volume set that also featured another previously unpublished Austen novel, Persuasion.

Northanger Abbey follows seventeen-year-old Gothic novel aficionado Catherine Morland and family friends Mr. and Mrs. Allen as they visit Bath. It is Catherine's first visit there. She meets new friends, such as Isabella Thorpe, and goes to balls. Catherine finds herself pursued by Isabella's brother, the rough-mannered, slovenly John Thorpe, and by her real love interest, Henry Tilney. She also becomes friends with Eleanor Tilney, Henry's younger sister. Henry captivates her with his view on novels and his knowledge of history and the world. General Tilney (Henry and Eleanor's father) invites Catherine to visit their estate, Northanger Abbey, which, from her reading of Ann Radcliffe's Gothic novel The Mysteries of Udolpho, she expects to be dark, ancient and full of Gothic horrors and fantastical mystery.

Northanger Abbey has been the subject of many adaptations for film, TV and the stage.

Jane Austen (1775-1817) was an English novelist whose works of romantic fiction, set among the landed gentry, earned her a place as one of the most widely read writers in English literature. Her realism, biting irony and social commentary have gained her historical importance among scholars and critics.

From 1811 until 1816, with the release of Sense and Sensibility (1811), Pride and Prejudice (1813), Mansfield Park (1814) and Emma (1816), she achieved success as a published writer. She wrote two additional novels, Northanger Abbey and Persuasion, both published posthumously in 1818, and began a third, which was eventually titled Sanditon, but died before completing it.

In 1994, American literary critic Harold Bloom placed Austen among the greatest Western Writers of all time. In a 2002 poll to determine whom the UK public considers the greatest British people in history, Austen was ranked number 70 in the list of the "100 Greatest Britons". In 2003, Austen's Pride and Prejudice came second in the BBC's The Big Read, a national poll to find the "Nation's best-loved book."